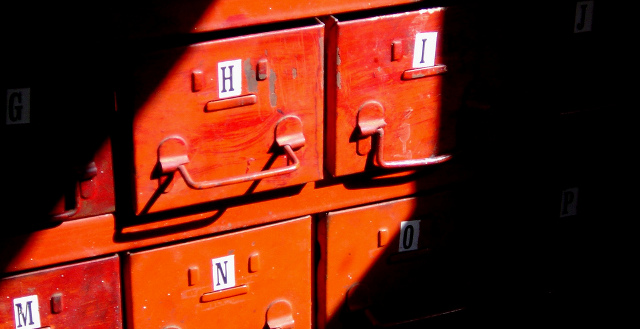 Hash tables are used to implement map and set data structures in most common programming languages. In C++ and Java they are part of the standard libraries, while Python and Go have builtin dictionaries and maps.

A hash table is an unordered collection of key-value pairs, where each key is unique.

Hash tables offer a combination of efficient lookup, insert and delete operations. Neither arrays nor linked lists can achieve this:

The most common hash table implementation uses chaining with linked lists to resolve collisions. This combines the best properties of arrays and linked lists. 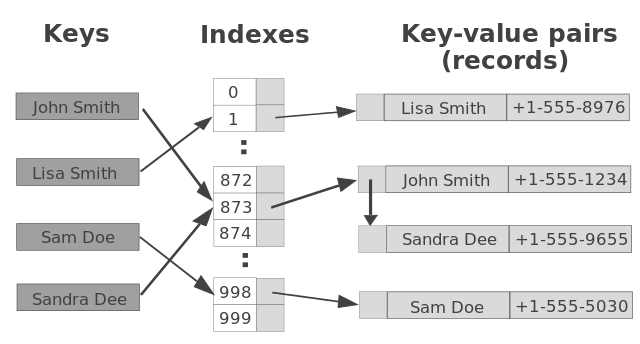 This hash table consists of an array with 1000 entries, each of which refers to a linked lists of key-value pairs.

Let’s start with a somewhat simplified example: a data structure that can store up to 1000 records with random integer keys.

where LinkedList denotes a linked list of key-value pairs.

Inserting a new record (key, value) is a two-step procedure:

This is a constant time operation.

A lookup is implemented by

Since the keys are random, there will be roughly the same number of records in each list. Since there are 1000 lists and at most 1000 records, there will likely be very few records in the list table[key%1000] and therefore the lookup operation will be fast.

The average time complexity of both the lookup and insert operations is O(1). Using the same technique, deletion can also be implemented in constant average time.

We want to generalize this basic idea to more complicated keys that aren’t evenly distributed. The number of records in each list must remain small, and the records must be evenly distributed over the lists. To achieve this we just need to change the hash function, the function which selects the list where a key belongs.

The hash function in the example above is hash = key % 1000. It takes a key (a positive integer) as input and produces a number in the interval 0..999.

In general, a hash function is a function from E to 0..size-1, where E is the set of all possible keys, and size is the number of entry points in the hash table. We want this function to be uniform: it should map the expected inputs as evenly as possible over its output range.

Java’s implementation of hash functions for strings is a good example. The hashCode method in the String class computes the value

This method can be used as a hash function like this:

where size is the number of entry points in the hash table.

Note that this function

Two properties that should hold for a good hash function.

If the table size is increased by a constant factor for each resizing, i.e. by doubling its size, this strategy gives amortized constant time performance for insertions.

For more on the performance of this strategy, see Amortized time complexity.

How to analyze time complexity: Count your steps
Time complexity analysis esti­mates the time to run an algo­rithm. It's calcu­lated by counting elemen­tary opera­tions.
yourbasic.org
Hash function
Wikipedia
Maps explained: create, add, get, delete
Go maps are implemented by hash tables and offer efficient add, get and delete operations. You create a new map with a make statement or a map literal.
yourbasic.org